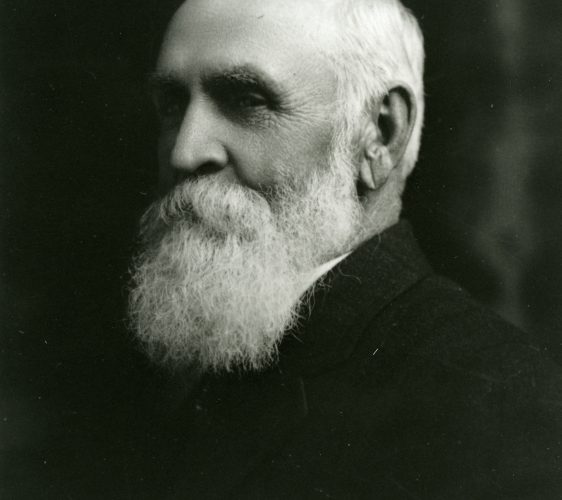 Barnard White was born in London, England, on November 9, 1839. His parents were Mary Ann Syer and William White, who died when Barnard was two years old.

Barnard dreamed of being a sea captain from childhood, but was turned down each time he applied to serve on a ship because he was one-fourth inch too short.

In May 1854, Barnard joined the Mormon Church. Later, he booked passage on the ship “Cynoswen” bound for New York. Upon his arrival, Barnard borrowed a basket from his landlady, purchased some fish at a market, and peddled them until he had enough money to continue his journey to Utah. He also worked on a dairy farm.

When the wagon train Barnard was traveling with reached Devil’s Gate in Wyoming, conditions were dire because it snowed continually for three days. Since his shoes had worn out, Barnard wrapped his feet in rawhide from cattle that had died. He melted snow on sagebrush for water and made bread with soda and sage water. A relief train sent by Brigham Young saved their lives.1John A. Hunt Company

Barnard lived in Draper, Paradise, Ogden, and Perry. He was a success as a farmer and a logger, then opened a lumber yard that was prosperous. Barnard also imported the first pure-bred Holstein cattle into Utah.
Barnard’s three wives were Elizabeth Walters, Diana Mary Williams, and Sarah Jane Fife. Barnard died March 8, 1912, and is buried in the Brigham City Cemetery.