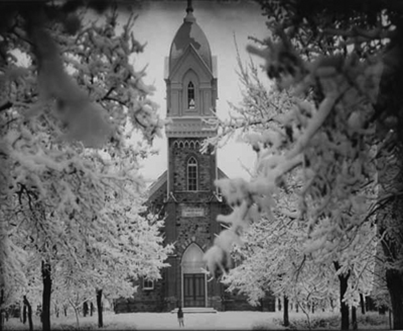 Prior to the completion of the Brigham City LDS Temple in 2012, the first sight which would greet a tourist’s eyes as they entered Brigham City was the impressive Mormon Tabernacle. This beautiful, historic building which towers above the trees and can be seen from the various entrances into the city was constructed by early day pioneers as a house of worship.
In the early colonization of the Utah Territory, church members were encouraged to construct tabernacles as a gathering place and a house of worship.

Excavation work had begun on the Box Elder Tabernacle when President Brigham Young visited the site during a regular visit to Brigham City. The chosen site was located across Main Street northwest of the county courthouse. It was President Young’s opinion that the site selected would not be the best since it was in the center of the business district. He led church leaders to “Sagebrush Hill,” approximately three blocks south on Main Street. When the right place was reached, Brother Brigham tapped his cane on the ground and exclaimed: “This is where you will build your Tabernacle.”1Jeffrey S. Packer, “History of Box Elder Tabernacle,” p. 1. See also National Register Nomination The spot was well chosen. Water ran in three directions from the site, and it commanded a place of prominence on a mound slightly higher than the surrounding land. On May 9, 1865, after President Young was satisfied with the location, he had surveyor Jesse W. Fox gather some large rocks to be the cornerstone for the tabernacle.2Packer, pg. 1. The original survey of Brigham City included property from 200 North to 200 South and from 400 East to 400 West. Thus the tabernacle site was not included in the original survey. The building site was located on approximately eight acres. Half of the site was located east of Main Street and half on the west side where the Brigham City Temple now stands. The site was narrowed by an acre on each side when Second South was widened to become the main artery from Main Street to Logan.3Interview of Jeffrey Packer by Kathleen Bradford, “Temple Property Acquisition Recounted,” Box Elder News Journal, August 22, 2012, p. 7. See also the Oral History of Jeffrey Packer. The next eleven years saw little or no progress on the construction work. Mormon settlers living in Brigham City played a role in the construction and completion of the Transcontinental Railroad, which was completed May 10, 1869, at Promontory Summit with the driving of the “Golden Spike.” With the completion of the Transcontinental Railroad, along with the Northern Utah Railroad, construction work on the tabernacle was slowed. In 1876, the rock walls began to rise from footings laid years earlier and in 1879 the roof was completed. Though the building was not finished, the first meeting was held in the building on July 27, 1879.4Packer, pg. 2. The materials used to construct the tabernacle included readily-available, abundant rock from the nearby foothills and timber from the mountains. The rock had to be hand-quarried and hauled to the site by horse and ox team. Timber was from hand cut-trees, milled locally by water power, and handmade brick from local sources.5Packer, pg. 5. The original tabernacle can be described as

“a simple rock structure, the pulpit was at the east end, and the choir loft was behind the pulpit. The benches were hand-made, and some had backrests. This early building had no vestry, no balcony or gallery. By 1890 the building had been extensively renovated with a balcony on the north and south walls, which permitted seating of up to 1,200 with standing room for another 200. The pioneer settlers of Brigham had spent 25 years off and on in the construction of the tabernacle and sacrificed much of their time and means, hauled rock, quarried stone, and cut lumber from the nearby mountains. Much of the cash outlay of $5,000 was obtained from the sale of contributed produce, including Sunday egg collections. With the completion of the building and the grounds decorated with trees, grass and flowers, the tabernacle was dedicated by Church President Wilford Woodruff on October 26, 1890.”6Packer, pgs. 2-3.

Even though the building had not been officially dedicated, it had been used through the years for religious services. Weekly community sacrament meetings were held each Sunday at 2 p.m. and fast day meetings were the first Thursday of each month from 10 in the morning until 12 noon. Stake conferences were held on a regular basis along with funerals and other public meetings. 7Olive Kotter, “Through the Years,” Brigham City Eighth Ward, 1953, p. 7. At about 1:30 on a cold Sunday afternoon in February 1896, as Brigham citizens began to assemble at the tabernacle, they observed how cold it felt in the building. The following is quoted from the Brigham Bugler Newspaper, dated February 15, 1896:

John Baird and Lars Mortensen went into the basement. Near the east heater, directly beneath the pulpit, they discovered the timbers on fire. They rushed upstairs, notified the dozen or so people who had already come to attend the regular Sunday services, and then dashed downtown to give the alarm. The people fled from the building, the men going into the basement to extinguish the flames.
They soon found their efforts were powerless and at once returned in rescue of the silver service. When they reached the main room again, they found it full of smoke, that had burst up through the burning floor. They were unable to enter. In less than half an hour, the sacrament, snatched from the handsome silver service was being greedily devoured by the fire fiend.
As soon as possible the firemen were on the spot. They were handicapped from lack of hose and shortage of water. But the fire had already got such a headway that work as they did, like young Trojans, they could not cope with the rapidly spreading flames.
In less than an hour from when the fire was discovered, the main building was a mass of furious, cracking flames, and the fire had eaten its way through the roof and leaped upward into the inflammable tower. At 2:30 there was little left of the noble structure excepting the bare walls, now blackened, cracked and stripped of every square foot of wood; even plaster was completely skinned off.
Excepting chairs, benches, etc., rescued from the vestry in the rear nothing was saved.
A heavy south wind was flowing all during the conflagration. Burning cinders were carried a quarter of a mile into the northern part of the city. Several structures were then set on fire, but the flames were promptly extinguished.
So Brigham City’s splendid Tabernacle is no more.8Quoted in Packer, pgs. 3-4.

This tragic event did not thwart the spirit of the people. The Stake Presidency met with members of the First Presidency of the Church and approval was granted to restore the building. A competent committee examined the walls of the building and reported that it would cost $10,000 to reconstruct it. A sum of $2,500 was promised from general church funds. Contributions were solicited from the local church members and from persons who did not belong to the Church. The total cost of construction was $15,117.25.9Packer, pg. 4. Just thirteen months following the devastating fire, the tabernacle was rededicated on March 21, 1897, by President George Q. Cannon. A writer in the March 20, 1897, edition of the Brigham City Bugler explained, “What on the day of the great fire appeared a calamity, will tomorrow be looked upon as a great blessing — there is really no comparison between the old and the new.”10Packer, pg. 5. A steeple tower adorns the west end of the structure, and 16 pinnacles cap the red brick buttresses, which support the rock and limestone walls. The pioneer architects selected a Gothic exterior and tall slender windows and doors set off by the Gothic arch. The vestry is on the east end of the building, and the balcony provides seating on the north and south sides. The pulpit, now on the west end, is surrounded by choir seating. The floor was reconstructed so that it slopes from the rear by the vestry to the front. The pulpit is elevated at both the high council and presidency levels. Electric lights were added to the building. A majestic Reuter organ was installed in 1951 which is enhanced by the superb acoustical properties of the pioneer tabernacle which houses it.11Packer, pgs. 5-6. The Church of Jesus Christ of Latter-day Saints completed a major restoration of the Tabernacle in 1987 at a cost exceeding $700,000. The exterior stonework was cleaned and repainted. The brick on the buttresses was stripped of the dark red paint. Worn bricks were replaced and the pinnacles completely rebuilt. The exterior wood was repainted and the roof was repaired and re-shingled. New exterior doors were installed, keeping with the Gothic design. The interior was completely repainted with special attention given to the woodwork, plaster ceiling cornice and chandeliers. The heating system was reworked for better efficiency and new electrical and plumbing systems installed. New carpet was designed and installed, the organ was cleaned, re-voiced, and the case embellished to match the Gothic and classical decor.12Packer, pgs. 6-7. The restored Box Elder Tabernacle was dedicated by Elder Boyd K. Packer of the Quorum of the Twelve Apostles on April 12, 1987. It has served the Brigham City area for more than 100 years. From its pulpit, most presidents of the Church of Jesus Christ of Latter-day Saints have spoken sermons. It continues to be used in the community for stake conferences, other church meetings, and appropriate musical presentations. Free guided tours are given from May through October of each year.13Packer, pg. 7. The architect was Truman O. Angell.