Rosenbaum Hall had already played several roles in the community. It was one of Brigham City’s first commercial buildings, dating back to :863, as noted by Morris Rosenbaum in his diary: “Built a rock store on the south side of my place. Watson Bros. done the mason work. Moved into it Nov 4.” Rosenbaum soon went out of commerce and into government service, and in 1879 deeded the property, except a building known as “city hall,” to his wife Abigail Snow for the consideration of $100. She opened a dressmaking business on that location. Rosenbaum Hall was located on the west side Main Street just south of the intersection with 1st South.
Rosenbaum Hall’s designation as “city hall” was based on the wide use by the community. 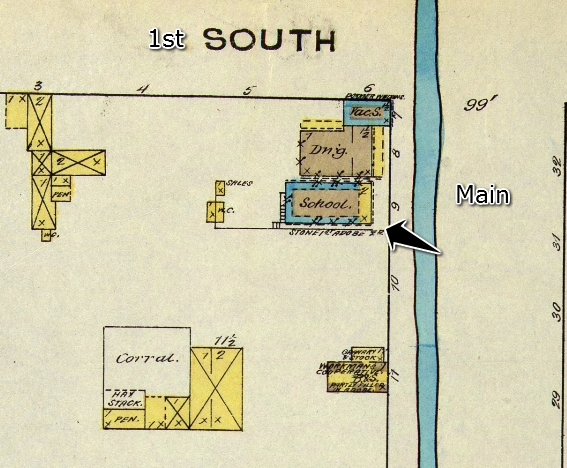 The dramatic society held productions upstairs as early at 1868 and again in 1889. It was also used as a church when the Box Elder stake was formed in 1877, indicating that it was no longer used as a store. The First Ward met in the lower rooms for school and church, and the Second Ward met upstairs for the same purpose. When Morris Rosenbaum was called on a mission in 1880, he sold the building to Brigham City School District No. 5, and Abigail signed over her portion in 1885.
In 1890 she sold the property north of the actual hall to a son, David Rosenbaum of Kelton, Utah. He converted the building to the Gem Saloon, with some of the Caldwell sons (his half-brothers, since Abigail was married to a Caldwell prior to her marriage to Rosenbaum) also taking charge as proprietors when he went to Kelton to manage his store there.
“The Gem saloon was indefinitely closed Tuesday night. Business is so quiet, Manager D. Rosenbaum concluded to close up for the month or so,” stated the Brigham Bugler of April 4, 1891. Soon afterwards the property was mortgaged and later sold to Lorenzo Snow in 1899. The north 25 feet was sold to A. W. Compton for construction of his new photo studio.
Meanwhile, Rosenbaum Hall was still being used as a school and brought the wrath of the Brigham Bugler for its appearance in an article on November 1, 1890,

The old Rosenbaum hall was once considered an elegant structure. It may have been. But all that backwoodism has worn off. It’s a creature of a departed age. The old pile is now a living disgrace to our city and an ugly insult to the term district school.1Brigham Bugler, (Brigham City: November 1, 1890), 1.

As near as can be determined, the building went unused for a period before being sold to R. L. Fishburn and Sons. They hired C. M. Squires to renovate the hall, and later purchased an additional 24 feet to the north to accommodate an expanded building, which was flush against the new Compton’s Photography Studio. The old theatre spirit came back a bit when the property was sold in the 1930s, and it housed a motion picture theatre, which was known as the Roxy at the time it was torn down in 1981.2Sarah Yates, “Demolition lays bare a remnant of history,” Box Elder News, (Brigham City: January 31, 1981), 1, 9.