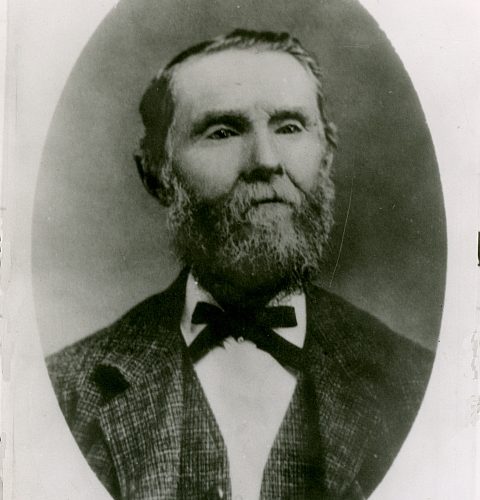 Alvin Nichols was born on August 19, 1819, in Bastard, Leeds County, Ontario, Canada, to Sheldon and Susannah Chipman Nichols. He was baptized by Mormon missionaries in 1834, and three years later left Canada for DeWitt, Missouri, with the Thomas E. Page Company. He moved from DeWitt to Far West, then to Nauvoo, Illinois, where he became acquainted with the Mormon Prophet Joseph Smith.

While in Nauvoo, Alvin was stopped by a mob inquiring about where the Prophet was hiding. When Alvin said he didn’t know, the men beat him with their guns and broke three of his ribs. He relocated to Council Bluffs (Kanesville) in Iowa, then to Alpine, Kaysville, Willard, and Brigham City, all in Utah. Alvin arrived in Brigham City in March 1856.

Alvin was active in his church as well as in politics, serving as bishop for the Brigham City Ward and then the Second Ward, a director of the Co-op, a selectman for Box Elder County, councilman for Brigham City and Indian agent for the U.S. Government. The Indians often came to Alvin’s home for food and for advice. When some peaceful Shoshone Indians were mistakenly accused of an uprising and then attacked by U.S. soldiers, hundreds of them escaped by night and journeyed to Alvin’s home where he helped them hide near Mantua until the trouble was over.
In 1857, Alvin embraced polygamy and married two 15-year-old girls, Mary Ann Johnson and Charlotte Wright. He also married a third time and had a total of 28 children.