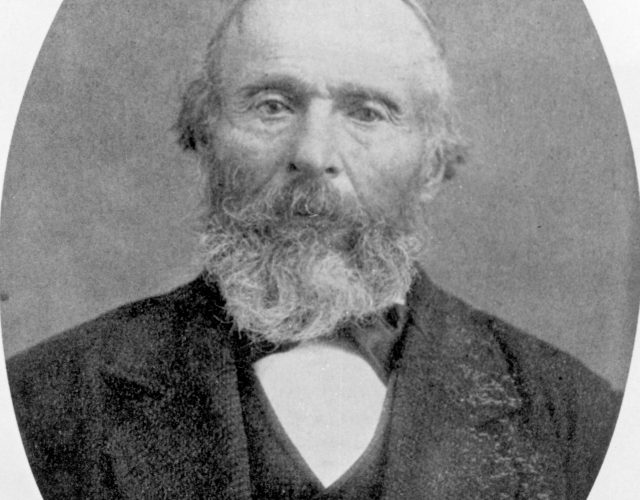 Abraham Hunsaker was born in Jonesborough Town, Union County, Illinois, on November 29, 1812. When Abraham was a teenager, he was bitten by a snake while he and his sister Nancy were hunting bears. Even though Abraham tightened his galoshes above the bite, the poison spread throughout his body. He fainted a number of times. Drinking a pint of hog lard saved his life.

When Abraham was about 18 years old, he saw Eliza Collins spinning flax on a little wheel. She was about 13 years old. In time, she would become Abraham’s first wife. (Ultimately, he would marry four more women and have 52 children.)

Abraham was kind-hearted and shared his home with some Mormons driven out of Missouri. Abraham and Eliza learned about Mormonism from them and converted to their religion in November 1840. The couple emigrated to Utah where they lived in Brigham City and Mantua.
Tragedy struck the family when Abraham and his adopted son Lemuel, a Paiute Indian, were staying at their ranch house in Mantua. Lemuel was shot in the back by a soldier and died. Prior to this incident, another son Lewis was kidnapped by Paiute Indians and killed.

Abraham eventually settled in Honeyville where he built the town’s first flour mill. Every Christmas, Abraham anonymously put a sack of flour on the porch of needy families and widows. He died in 1889.

Note that Hunsaker is often listed as having served on the Brigham City Council – this is incorrect. He appears in a picture that features the Brigham City Mayor, Council, and others (there are 9 people in the photo, while the Council never had more than 5 members). The others (including Hunsaker) may have all been local religious leaders or other political leaders.