Dr. Arthur D. Cooley came to Brigham City from Montpelier, Idaho, where he had established a community hospital and served the Bear Lake area for four years. Arriving in 1916, he worked with Dr. Pearse for a few years, and in the 1920s opened a hospital in the old two-story Abraham Hunsaker home at 400 South and Main.Mrs. A. D. Cooley, letter to Sarah Yates, undated in 1976.

As had Dr. Pearse, the Cooleys suffered the tragic loss of a young son to illness while living in Brigham City. During the depression years of 1934-35, Dr. Cooley asked that persons work off their medical bills by donating labor toward the erection of a hospital dedicated to the memory of his son Russell. Of this, his widow wrote: “It was a big undertaking for one person to do, but he was always happy he was able to do it for Brigham City (which) he loved very much, as we all did and do.”1Mrs. A. D. Cooley, letter to Sarah Yates, undated in 1976.

The three-story, 50-bed Cooley Memorial Hospital, located at 40 North First East, was opened and dedicated in May of 1935. The first local hospital built expressly for that purpose, it was considered one of most modern hospitals in construction and equipment when it was built. Included in the interior was a curved ramp leading from the second (main) floor to the third floor, making it more accessible for wheelchairs and gurneys. Dr. Cooley managed this hospital for 12 years.

Dr. Cooley was active in the community and medical affairs. During the years 1938 and 39, he received specialized ear, nose, and throat training in Louisiana, then ophthalmology training at the University of Chicago. He was chosen to travel to India to do special work in cataract surgery, bur the outbreak of World War II prevented this. In 1942, Dr. and Mrs. Cooley moved to California, where he specialized in eye, ear, nose, and throat practices. He passed away in 1971.2Mrs. A. D. Cooley, letter to Sarah Yates, undated in 1976.

The hospital was purchased in 1946 by William Vosco and Mamie Peters Call, with the agreement that the name would remain Cooley Memorial Hospital. An addition was built to the south in 1962. This hospital served the community for more than 40 years, a dream come true for Dr. and Mrs. Cooley as they watched their son’s memorial contribute to the health of two generations. 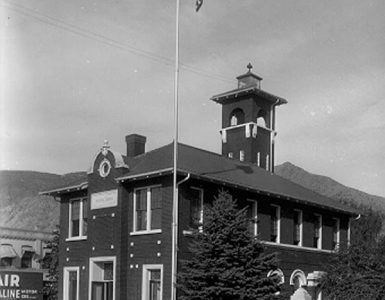 As the twentieth century came into its own, Brigham City officials saw the need to have their own office and council space, improved quarters for the fire department, and their own jail. Although the idea of a city hall...

Utah-Idaho Sugar Factory Brigham City’s second major industrial development came with the success of the sugar beet industry in Box Elder County, which took root in 1901 with the planting of beet seed in Fielding for... 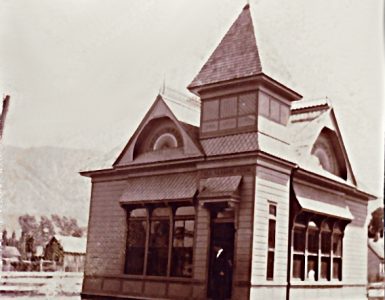 Home reading had been promoted in the community since the Sunday School presidency’s 1870 creation of a library of books for children. That practice continued within the four LDS ward schools, which each had a small...