Brigham City Platted
Families were eager to move from the crowded fort onto their own land, but again a survey was necessary. Jesse W. Fox, Utah surveyor general from 1852-84, surveyed and platted the townsite of Brigham City in 1855. Based on the Salt Lake Meridian, Box Elder County’s survey is centered at the intersection of Main and Forest streets — then and now the center of Brigham City — and continues as the focal point of the county numbering system.

This first survey, known as “Plat A” extended from what is now Second North to Second South, four blocks east of Main Street and the same distance west. The first lots consisted of one half acre, eight by ten rods (132 x 165 feet). Anyone wishing to procure a lot in Plat A was given a title to the lot of his choice after he had built four rods of the rock wall which was being built around the city.1Lydia Walker Forsgren, History of Box Elder County, Brigham City: Daughters of Utah Pioneers, 1937), 235-236. 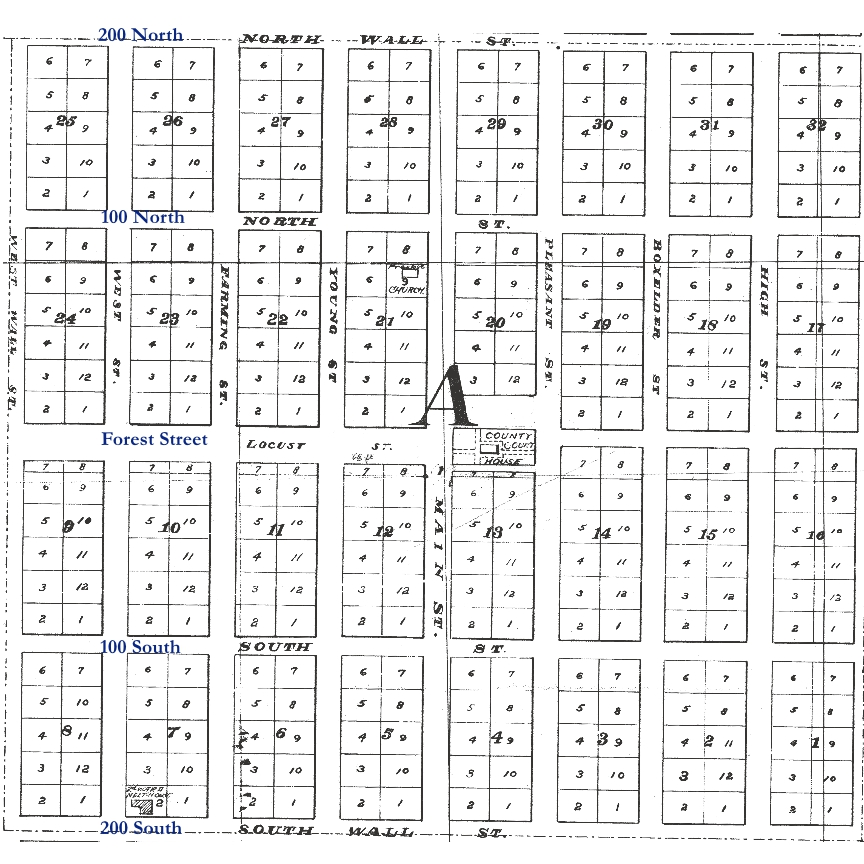 The initial survey was based on the premise that the city would be enclosed within an eight to 12-foot high stone wall, which the settlers began erecting starting at the northeast corner of Plat A on either side of the “flouring mill” in construction at 200 North and 400 East.

The reason for its location was two-fold. At that spot water diverted from the creek farther upstream could be brought to the mill-wheel, to provide power for the ponderous millstones, and the mill could serve as a kind of stronghold, or blockhouse, at the corner of the wall, in the spot closest to the Shoshoni camp (the spot considered most vulnerable). There were neither windows nor doors in the two walls of the mill which faced outward (north and east). In those walls there were only gun-slits.2Frederick M. Huchel, A History of Box Elder County, (Salt Lake City: Utah State Historical Society, 1999), 73.

Efforts to construct the wall were half-hearted and sporadic since the local Indian threat was never great and settlers were more concerned with building their own homes, digging water ditches, planting crops, and generally providing for their families. Only parts of the north and east walls were built. Stones used in the wall and hauled to various locations for its construction gradually found their way into rock foundations of local homes and into stone buildings. However, this fort mentality made Brigham City’s streets, blocks and lots differ from those in most Utah towns. In order to accommodate a higher concentration of residents within the proposed perimeter of the wall, the ten-acre blocks used in most other Utah cities were cut in half to five acres, and the lots were reduced from one and a quarter to one-half acre each.3David N. Morrell, From Then Until Now 1851-2008, (Brigham City: Brigham City Stake of the Church of Jesus Christ of Latter Day Saints, 2008), 3.

Thus, the five-acre blocks for the new settlement were as long from north to south as a Salt Lake City block, but only half as thick, being forty rods by twenty. This meant that the width of streets had to be scaled down, five rods being allowed for roadways running north and south and four rods for those running east and west. A strip twenty rods wide, bisecting the center of the town from east to west, was reserved for public squares.4Nielson, Vaughn, and Church of Jesus Christ of Latter Day Saints, The History of Box Elder Stake: written in commemoration of the hundredth anniversary of Brigham Young’s setting in order a state for Box Elder County, (Brigham City: Box Elder Stake, 1977), 9.

According to pioneer accounts, Thomas Mathias carried the front end of the measuring chain in laying out the city and was permitted to have first choice of lots. He chose Lot One in Block One, which is now located at the southwest corner of Third East and Second South.
The earliest homes were built of logs, some of them moved or rebuilt from the Old Fort, but after people moved onto the platted land they wanted more permanent structures. This need was fulfilled by adobe, a sun-dried mud brick. The first adobe yard was built near 600 North and 600 West. In 1855 James Bywater, George Reeder, and Anthony Metcalf rented an adobe yard from William Watkins and made thousands of adobe bricks for the courthouse. They paid Watkins one-sixteenth of their adobe as rent.5Lydia Walker Forsgren, History of Box Elder County, (Brigham City: Daughters of Utah Pioneers, 1937), 88.