The period from 1880 to 1900 was a time of unprecedented home building in Brigham City. Although smaller homes were still being built, the prosperity of some leading residents brought a major shift in the style of architecture from the settlement period. The styles also reflected a national trend toward Picturesque and Victorian homes.
Earlier homes were mostly of a symmetrical form with classical details, most commonly a modest two-room adobe house, or a hall-and-parlor house with one and one-half stories, gable-roofed with a chimney at each end. In many cases, these homes were expanded through the years, adding wings as families grew. These can be seen scattered throughout Brigham City, some in almost original form, others serving as the core of a more modern home.
The first design shift took place in larger picturesque houses, introduced in Utah about 1865, appearing locally in the 1880s. The style most commonly associated with this period is the Gothic revival, vertically oriented architecture with pointed arches, steeply pitched roofs and elaborate ornamentation, such as curved shingles or carved designs, known as gingerbread.

Most importantly, the Picturesque movement introduced and popularized the cross-wing design to Utah. Forward-projecting, in contrast to the horizontal side wing, it “is the minimal statement of the Picturesque quest for asymmetry.” This became the principal house type in Utah during the nineteenth century, incorporated into most other housing types.1Utah’s Historic Architecture, “Picturesque Building Styles, 1865-1885,” http://utahhistory.sdlhost.com/#/item/000000011019963/view, Utah State History, 2012. Although some Picturesque homes were erected locally, the ideas had their most direct impact as decorative elements applied to the exteriors of older classical and traditional forms, such as steeply pitched gables over doorways, gingerbread trim, and decorative heads over windows.

Italianate, another important Picturesque style, introduced the broad flat roof with bracket eaves into American architecture. In Brigham City, these were relatively large boxy two-story houses with ornamentation around the eaves and a low-pitched hip roof. Very few were built in Brigham City. The only two surviving homes are located just behind the Box Elder Tabernacle. The Oliver G. Snow house, 205 South 100 East, was a full two stories with a cross-wing floor plan and shallow-pitched hip roof with a bracketed cornice, long rectangular windows with wooden hood-molded detail, and a fancy front porch. This home was altered when it became a mortuary. The Moroni Faulkner house, 177 South 100 East, is also a two-story boxy adobe brick home, a relatively plain version of the side passage Italianate type. It also has a bracketed cornice and long horizontal windows.2Historic Resources of Brigham City, Brigham City Museum. This was the style chosen to modernize the exterior of the County Courthouse in 1887, the period in which it was most popular in Utah. 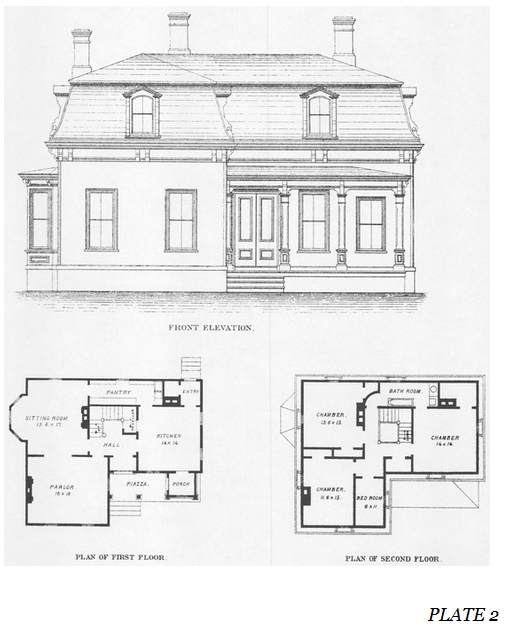 The Second Empire style, most commonly encountered in the form of a Mansard roof, was often placed upon a Picturesque-era house type. This style is characterized by a flat or gently sloped roof that curves outward over part of the top story, so windows protrude from the roof. This style was particularly popular in Brigham City, enough that it was the subject of an architectural study.3Cindy Yurth, “Mansard Roofs Posed Mystery: Why Were There So Many Here?” Box Elder Journal, Brigham City, January 14, 1981, 1. Although common in the Midwest, Brigham City seems to have by far the highest concentration of Mansard roof houses in Utah. The local homes do not have the intricate features of the Second Empire style. Except for the fancy roof, they are rather plain, either rectangles or L-shaped.
There are three explanations for the anomaly: mail-order plans, trading of labor, and (oddly enough) genealogy. Pictured on the front page of “Bicknell’s Village Builder and Supplement,” published in 1878, is the pattern for a Mansard roof house, described as a “French cottage . . . simply but conveniently arranged for a small family.”Bicknell’s Village Builder and Supplement, New York, 1878. (Designed by architect Lyman Underwood of Boston, “It is intended to be built of wood (although the local models are brick or adobe) and painted to harmonize with the surroundings . . . the cost under ordinary circumstances would be about $3,800.” (Adjusting for inflation, about $88,000 in 2013.) See the complete Bicknell’s Village Builder and Supplement, 1872 edition.) No one knows if this was the actual plan used by local builders, but it was the only one located by a historic architect.4Yurth, citing Dr. Peter Goss of the University of Utah. Builders often traded their services, especially relatives, and almost all of these homes were built for (or by) families related to the Forsgren family by blood or marriage. Probably built first and most faithful to the original plan is the August Valentine home, 494 South 300 West, in 1888. Other examples are the homes of John Christensen, 361 South 300 East, 1888; George Craghead, 92 South 100 West, 1890; Charles Higley (built by Jim Romer), 177 North 100 East, 1893; George Reeder, 135 North 100 West, circa 1894; Lars Nelson, 477 North 300 West; circa 1894; John Wesley Horsley, 48 South 300 West; Oleen Stohl, 155 North Main, 1895: Columbus Valentine, 37 West 600 South, circa 1896; Oscar Forsgren, 124 South 500 West, 1903, which has intriguing details like a curved roof and porch and spiral staircase.

Prosperity was a driving factor in the home-building rush of the 1890s. Coupled with the arrival of electricity and a pressurized city water system, the time was right for multi-storied, showy Victorian homes.

No family better exemplified this affluence than the Knudson brothers, major exporters of fruit and produce, who branched out into other commercial ventures and built many of the city’s commercial buildings. That included the Union Block, one of the first two-story business blocks along Main Street, built in 1892. It first housed both the Wilson Saloon and Knudson Brothers’ produce on the first floor, with professional offices on the second floor.5National Register Nomination, Jonathan C. and Jennie E. Knudson House, Brigham City Museum, 2. They later built two more commercial buildings in the same block, located on the east side between the Courthouse and 100 South. Their wealth was reflected in their homes. Located on the corner of 100 South and 100 East, the residence of Charles W. Knudson was an elaborate multi-gabled Victorian house with three fireplaces on the ground floor. It was demolished in 1972 to make way for a bank. Two other Knudson homes, 244 South 100 West, and 15 South 100 East, still stand but have alterations.
Still magnificent in its historic integrity is the Jonathan C. Knudson home at 48 South 100 East, with construction started in 1898. Its nomination to the National Register of Historic Places gives the following description:

The two-story Knudson house is typical for the time period. Its form is a central block with projecting bays, Distinctive eclectic features are a Queen Anne corner tower with intricate dentils and scroll design; a wrap-around porch; and shingle-style gable ends. The walls of the house are constructed of locally-fired brick and have an insulating adobe lining behind the brick. Soft California pine woodwork is a prominent feature of the interior of the house. An elaborate staircase, baseboards, doors, door moldings, and built-in cupboards are all made of this wood.6National Register Nomination, Jonathan C. and Jennie E. Knudson House, Brigham City Museum, 2. 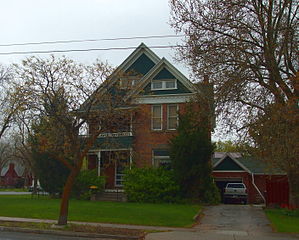 The Nels and Minnie H. Jenson house, built circa 1896, at 136 East 100 South, is also a fine example of the larger Victorian eclectic houses in the city. Jenson was an attorney, as well as a businessman and engaged in farming. This two and one-half story house is one of the largest older homes in the city. Its national register nomination notes:

Its form is a rectangular block, a common type of Victorian house in Utah, but the only one in Brigham City. This form is based on the side passage plan where the narrow end of the house faced the street and contains the main entrance… The Jenson house has three shallow bays, attached to the east, west, and north (facade) side of the house… All roofs are gabled and the facade contains a porch with a balcony above the entrance door. Original turned columns and decorative molding of the porch are still intact and in good condition… The interior has all original features: door with transoms, the staircase with grained panels, parlor and dining room fireplaces inlaid with tile, hanging light fixtures, and even original brass door knobs.7National Register Nomination, Nels and Minnie H. Jenson House, Brigham City Museum. See photos at http://pdfhost.focus.nps.gov/docs/NRHP/Photos/00001588.pdf

These elegant homes were not the average, but standouts, in the community. A 1986 survey of Brigham City showed 30 Victorian Eclectic homes, with only 14 large enough to be two stories.

The more common, less-expensive house during the period was called the Victorian Cottage. Its usual forms were the cross wing and the central block with projecting bays, with entry into the front room or parlor. Their simpler form and smaller size made them much more likely to be expanded or remodeled, although the original form is usually recognizable.
The 1986 survey noted 55 Victorian cottages still standing, only 17 of which had not had major alterations. An example of this simpler form is the Albert Jeppson home at 631 North Main, a modest brick Victorian cross-wing with a wrap-around porch, built circa 1895.8National Register Nomination, Albert Jeppson House, Brigham City Museum, 2002. Although many period homes have been demolished, renovated and remodeled, Brigham City is fortunate to have a good number of homes serving as of this period in its history.